Whether you know it or not the Australian piano teaching landscape is about to experience big change. It’s the kind of change that happens not when something is added to the mix, but rather when something is taken away.

Gina Wake has been working at Hal Leonard Australia pretty much since the start of the 21st century, and her role at Hal (as the company is affectionately referred to by those who work there) has developed during those nearly 15 years to the point where it’s hard to know quite where to start in listing Gina’s contributions.

But I’d like to pick out some – just a few, out of many – highlights.

The first is the Champagne Launch concept for the “Getting to…” series. In 2003, the idea of a graded repertoire series published by an Australian publisher (other than the AMEB) was almost unthinkable. I’d pitched the idea in 2002, and in May 2003 the green light was given to the project. By October the books had come back from the printers and I was touring the country introducing teachers to three fresh publications – Gina’s first piano product launch that wasn’t connected to books created in the US. 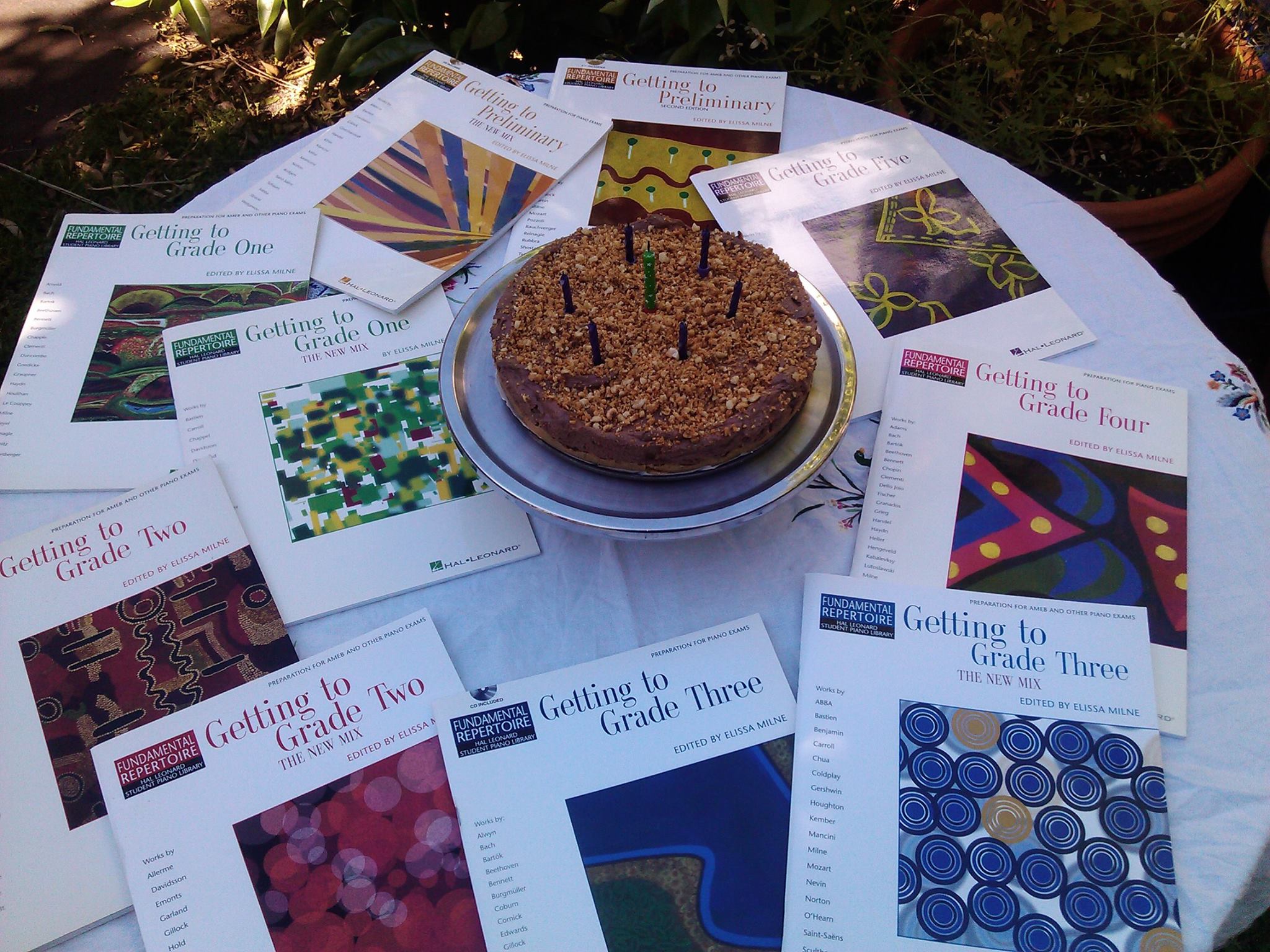 “Let’s serve champagne!” Gina had enthused down the phone line at me, telling me all about the launch plans. “I want teachers to be as excited as I am! This is going to be GREAT!”

And it was! It was great, and then some!

Around the country the “Getting to…” series launch events saw teachers congregating in spaces organised by the local print music retailer, listening to me talk about Getting to Preliminary from 9.30 til 10.30 and then being served a glass of champagne. I’d never seen such happy piano teachers! Even the teachers who chose orange juice or sparkling mineral water (like me!) loved the vibe of the thing! And we (kind of) managed to maintain some focus for the Grade One and Two books in the hour and half after champagne had been served!

A second highlight is the invention of the Australian Piano Teachers’ Music Hub on Facebook. Long before piano teacher groups were a ‘thing’ Gina had the idea to create a page for local piano teachers – even though Gina wasn’t all that keen on being on Facebook herself for the first few years! That page still sets the bar for music publishers everywhere in terms of engagement and connection with piano teachers in the community. Fantastic forward thinking on Gina’s part.

But probably the biggest, brightest highlight of all is the creation of this magazine this tribute was written to be a part of, The Piano Teacher.

Way back in 2002 Gina would produce newsletter-type booklets that went out with articles on various specific teaching points coming out of the HLSPL piano method, and updates about things of interest to piano teachers generally, including other new publications. The newsletter would include details of workshops that might be coming up, and while it was full of AMAZING content, it really was a ‘newsletter’ more than anything else. 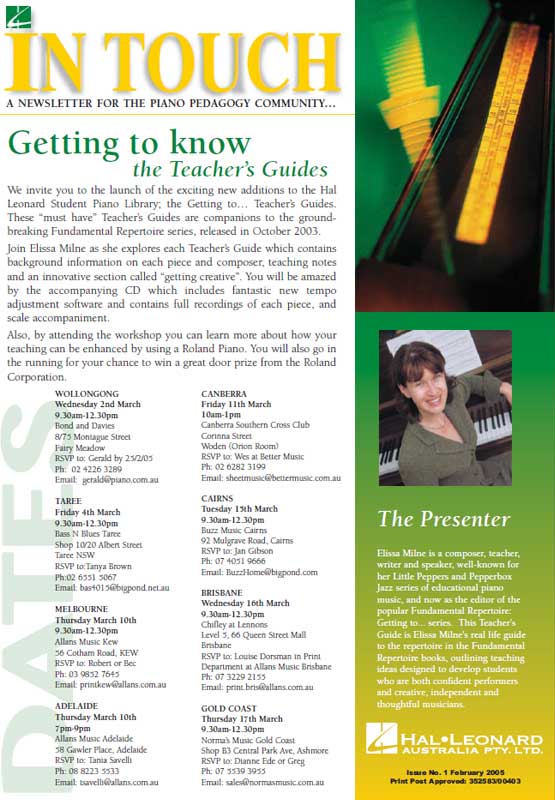 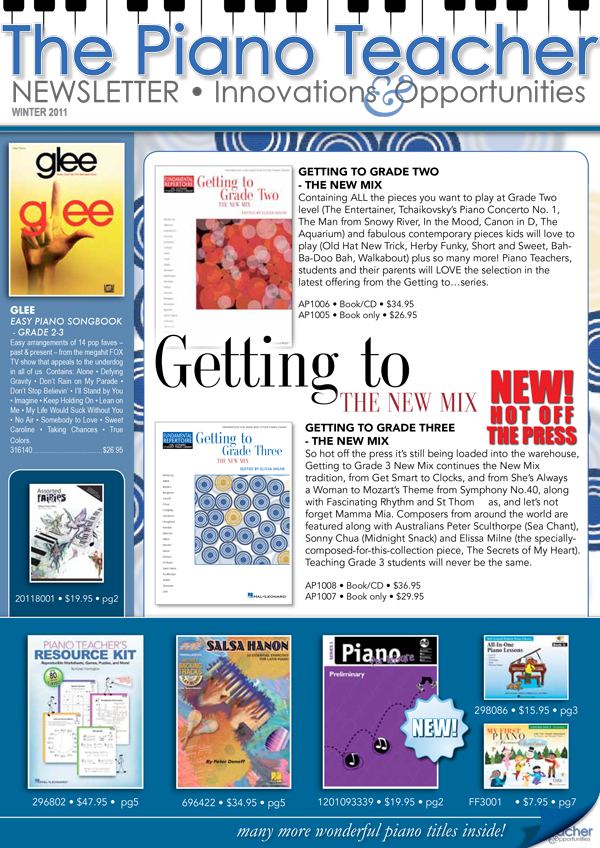 [/column]
[/columns_row]
But Gina had a far grander vision! The Piano Teacher magazine has been both Gina’s day-job and a labour of love. Early meetings about what this new magazine was going to be like involved Gina sourcing all kinds of publications to draw on for inspiration, and the foundational concept was that this magazine would have really useful teaching content the whole way through the publication and be a resource teachers wouldn’t want to throw in the bin!! Sure, new publications would be highlighted in each issue, but this was not going to be a catalogue – it was to be a genuine teaching resource that could be referred to for years to come.

And that is exactly what it has been for teachers all over Australia. 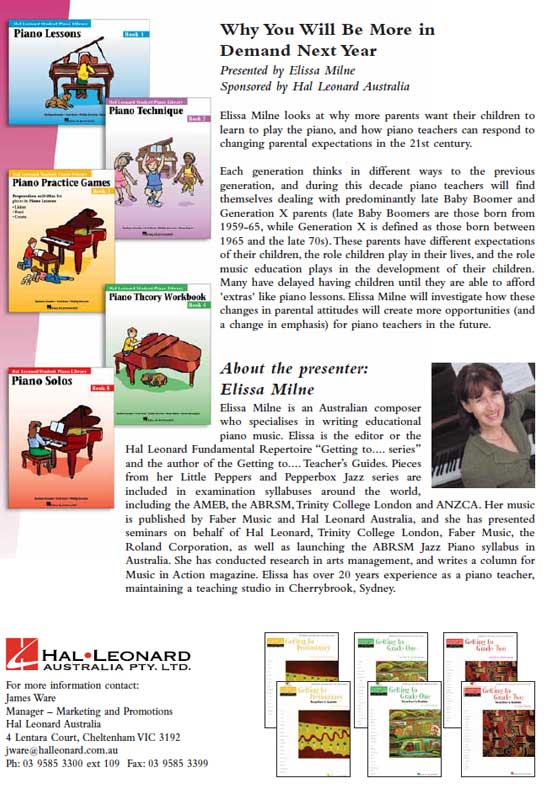 Written By
Elissa Milne
More from Elissa Milne
How should I best prepare my student for learning Debussy’s La fille...
Read More