For several days I had been playing Prokofiev’s Soir from Op.65, and when the review copies of the AMEB Series 17 Piano books arrived the first book I opened — serendipitously — was Grade 6. In the D List was this glorious little Prokofiev piece. An auspicious start to reviewing I thought.

What I like about many of these Series 17 pieces is their joie de vivre and playful pianism. The slower works broach an often magnificent elegance; there is a delicate sensitivity in the repertoire and this is both a commendable and thoughtful achievement. I also believe that this is a sensible approach to the assembly of the Series 17 books as most teachers will be using these pieces for children and adolescents, and the immediacy of the repertoire is paramount. I would add that while some of the repertoire may be unknown to teachers, there is something less complicated and far more accessible musically and technically than we have seen for some time in the piano publications.

The ease of the repertoire demonstrates an acceptance of early pianism from the time of the sons of Bach through to quite imaginative new Australian works. There appears to be a movement away from JS Bach and the density of the High German Baroque, CPE Bach’s Sturm und Drang and all its consequent performance practice problems to the early Galant style which is intellectually and pianistically more reasonable to attain for students. While there is still some CPE Bach included, we also find JC Bach’s music represented and this is most welcome.

This does not mean the Baroque is poorly represented, merely differently represented to include works that de-complicate teaching of performance practices. The editing too reflects this approach. In general the editing is economical yet sufficient to draw inferences of the style needed to be achieved. Likewise, ornamentation has been given a reduced treatment; however, I would note that sometimes the realisations given are not necessarily the best choice and in some instances incorrect. (Scarlatti Grade 8 is realised above the note instead of on the note which is a Scarlatti idiosyncrasy.) Regardless of this quibble, it is sensible to dispense with inadvertent confusion — the serious study of ornamentation can take place once technique is mastered.

The Romantic works offered are quite an enterprising departure from the usual well-known, well-trod paths. The modern repertoire is always stirring and typically entertaining to both play and listen to.

This may seem a strange thing to notice but don’t assume that an index with just ‘Bach’ means JS Bach. Each book generally only indexes the composers last name, however where two or more (especially with the Bach’s) composers of the same surname appear in the same volume, then the indexing reflects their initials as well. I also noticed the gender inclusiveness of many women composers; their monikers included their middle names and while interesting I didn’t necessarily understand why it was necessary.

Recording and Handbooks for Teachers

Dr Rita Crews has done an excellent job with annotating the pieces at each level. The glossary and definitions are excellent. I especially admire her definitions of Classical and Romantic, placing these eras chronologically earlier than has been usual. (I must admit my ignorance of recent teacher handbooks, and I do apologise if this is something that has been addressed previously.) The recordings by Peter de Jager and Caroline Almonte are essential listening for those unfamiliar with these new works.

The pieces centre on keys of up to one sharp or flat but also introduce the idea of the pentatonic scale through Elissa Milne’s Salt and Pepper and chromaticism through Sonny Chua’s Dripping Fairy. These two pieces explore the visceral extent of the piano’s keyboard along with the ever-charming Gnomes Marching by Miriam Hyde. Timing overwhelmingly centres on understanding the relationship between quaver, crotchet and minims. Salt and Pepper introduces the concept of an irregular time signature while Brett McKern’s Scherzo adds variety with changing time signatures.

Most of the pieces are designed around basic hand shapes conforming to easy chord patterns (i.e. those such as I, IV, V, V7 and their inversions in close movement). Articulations are pitched appropriately for elementary students.

Jo Kotchie’s Canons are varied, cleverly composed and thoroughly enjoyable. We find standard pedagogical repertoire transitioning well from Preliminary. There are some really delightful pieces in this Grade book such as Neefe’s Kanzonetta.

Antony Hopkins’ Ghosts utilises silently depressed keys and pedalling, noted as bracketed at this level, introducing the idea of the piano’s soundscapes.

Perhaps Grade 1 is not quite as adventurous as Preliminary or the Grade 2 repertoire but is nonetheless full of beautifully chosen pieces.

The List A and B works reflect a certain purposeful conservatism in addressing a growing awareness of different styles and pieces as well as gradual expansion of technical necessities. What I like about these choices is their accessibility; none are too long or too obtuse for the still elementary years of piano playing. There is a sense of pleasantness and ease in these works which I would expect to be quite a joy to teach. List C is a standout with some really inventive repertoire and once again with Kutnowski’s Stars and Galaxies, we find a simple piece that ambitiously explores the timbral qualities of the piano.

The book has already been enthusiastically received by at least one of my students — no sighs, yawns or shoulder shrugs when I played it to her. This is a very good sign!

N.B Sonny Chua’s T-rex Hungry List C no 2 should be played an octave lower than it appears in this book. (Sonny informs me that this was his error.)

The List A studies contain some old favorites as well as some more obscure choices such as Raichev’s The Water Mill. Perhaps the most obvious difference from the earlier grades in this Series is the inclusion of Sonatina movements in the B List. They are well chosen, offering enough diversity both musically and technically to oversee the development of a refined classical technique. Key signatures have moved to explore the first few flat keys.

List C again proves an absolute delight. Benjamin’s Soldiers in the Distance might epitomise a children’s narrative of another era but it affords a clever developmental angle on arpeggio playing. Koehne’s A Closed World of Fine Feelings and Grand Design might sound like it is named after a Trey Ratcliff photography app, but it is a delightful introduction to inner melodic playing and has a reflective appeal that many children enjoy. Seiber’s Foxtrot has long been a favorite of mine — teachers might not even be aware that his collection ‘Leichte Tanze’ is arranged for duet —and is full of rhythmic vitality and interesting chromatic turns capturing the Gatsby era surely making it a favourite with younger teens.

As with the previous grades, there is a seamless flow into the Grade 4 repertoire. To me, this is an important achievement. The List A Studies and List B Classical works are perfectly pitched to the developing technique and musicianship of a student moving toward an intermediate level of performance. The music is accessible, sensibly chosen to reflect not some obscure musical or intellectual point but to enjoy. The Kerin Bailey and Chaminade pieces of List C yet again nail the musical sensitivities so appealing to younger players while the Casella and Shostakovich works offer advancing challenges and yet retain a realistic and achievable outcome.

Level 2 introduces JS Bach’s 3rd 2 part Invention in D major. I’m not entirely convinced with the editing of this which shows semiquavers grouped per bar under a slur. I wonder if teaching these slurs too literally will impede fluidity. Burgmuller’s La Source introduces the small notes of cadenza notation to students. This may seem daunting at first but the piece, as with most of the Burgmuller Op. 109 Études, is a pleasure. Tansman’s Gigue is an excellent neo-Baroque pastiche.

List B contains works by Diabelli, Haydn, Mozart and Dussek. They are all excellent works eschewing excessive length or complexity for realistic musicianship at this level. If I were to name a piece that is a stand-out of the entire Series it would be the Rondo by Dussek in this List: its elegance and beauty are incomparable.

Glier [sic], MacDowell , Wollenhaupt and de Séverac are the unusual choices for List C — unusual but most welcome especially the latter’s lilting Invocation à Schumann. List D meanwhile explodes with Amanda Handel’s gripping Stalactite, one of Ibert’s Histories — A Giddy Girl — which sadly seems to have been in exile for some time. Sitsky’s Jewish Folksong — Dance is probably the most straight-forward on this list.

The Series 17 Grade 5 pieces definitely represent an increasing technical and musical sophistication but not so sudden as to be overwhelming. A new grade, if the previous one’s standards have been met comprehensively, should feel like a natural progression providing the repertoire is appropriate for the task. I would be confident that students will feel quite at ease transitioning from Level 1 to Level 2 demands with these works.

List A works include two Bach pieces, and a lively Heller Étude. List B provides diverse Classical choices, introducing a quixotic CPE Bach movement, Beethoven Variations, and some Haydn and Vořišek, the latter a lovely and musically accessible piece. List C has a Passepied by Delibes — a piece which I think is a transcription and undoubtedly presages Debussy’s from Suite Bergamasque. Further works by Grieg, Gade and Lyadov round-out this List, each only two pages, but concentrated with musical challenges. List D wins plaudits for three excellent inclusions from Ibert, Kats-Chernin (Cinema — this is fun!) and the gorgeous Prokofiev’s Soir, which I mentioned in my opening paragraph.

There are rich pickings in this Grade book, most sensibly chosen, all worth the effort.

The choices are quite daring: some Couperin, a left-hand Étude by Hyde, a delightful Allegro by JC Bach, and works by Clara Schumann and Tchaikovsky. I can never understand why Tchaikovsky works do not feature more in Australian piano teaching as there are some truly splendid pieces.

Again, riches abound in this Grade book. At this level, it really becomes a matter of personal taste in making choices for a student. I had no trouble with a Grade 8 student selecting a program from this book and feeling drawn to each of her choices. It is important to choose repertoire carefully, as these longer and more demanding programs can make or break a student’s success.

I am sure many teachers will enjoy this Series. While I am personally a devotee of the Manual Lists and don’t mind casting further afield for obscure works, I would confidently propose that many teachers will find the repertoire self-contained and more than sufficient to satisfy each Grade’s demands even without reference to the still valid Series 15 & 16 books.

Originally published in Music and the Teacher, Journal of the Victorian Music Teachers’ Association, Summer 2014. This version contains minor corrections and clarifications to the original. 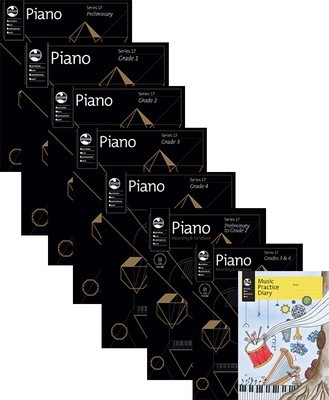 Written By
Helen O'Brien
0 replies on “There and Back Again: An Epic Piano Journey”