Good pedagogy moves from the known to the unknown. We all know this! However, we don’t always consider what is most well known to our students, what they are exposed to daily, and what is so familiar that the students themselves are not aware of the skills they are absorbing, just by listening.

At the very least, children hear pop songs in the car, on the radio or their parents’ playlists. Even if their listening is limited to “child appropriate” music, the style is undeniably contemporary. Children and teenagers relate to pop music. It is their language. Through pop songs, children and teenagers connect to their tribes.
Imagine that your student has flagged that they’d like to perform in their school’s talent quest. They can play Bach’s Prelude No. 1 in C major beautifully, but they don’t want to play that or any of their other pieces because “it isn’t cool.” You could suggest they learn an arrangement of a recently released pop song, or you could get them to write their own. Imagine the social currency that composing and performing an original pop song would give them!

“Songwriting gives students permission to take creative risks, make mistakes (and learn from them), and problem solve in novel ways.”

There is no suggestion here that you cease teaching Bach. In fact, encouraging students to write songs may be a gateway to composing musical theatre, art song or opera. It is possible to find links between the music they are writing and the music of past masters, through finding shared chord progressions or other common patterns. The more links we can make between the known and unknown, the more comfortable the students get with the unknown.
Teaching songwriting deepens musical understanding and develops skills that may not be covered thoroughly (or at all) when the focus of lessons is on learning repertoire. Songwriting explores melody writing, harmony, chord theory, modal tonalities, syncopation and complex rhythms, word setting and scansion (the natural flow of lyrics and how they fit rhythmically into a melody), and self-accompaniment. It also gets the students willingly singing! 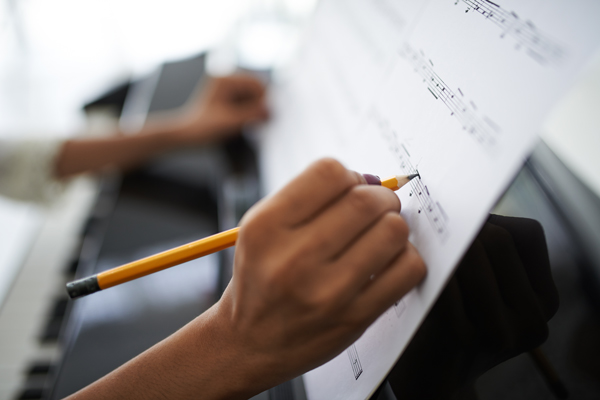 Here are five ideas to get started writing pop songs with your students:

As you can see, there is no need to be a master songwriter to get students writing their own pop songs. All you need is some basic chord theory and a willingness to experiment. Some improvisational skills are helpful, but not essential. Students are actually happy for you to discover new things with them and appreciate it when you model getting out of your comfort zone. There isn’t one right way to write a pop song. There are many approaches and methods to songwriting, and most accomplished songwriters use a combination of methods.

Songwriting gives students permission to take creative risks, make mistakes (and learn from them), and problem solve in novel ways. Regular songwriting with feedback enables students to become more able to consider criticism, and less susceptible to their own judgement or fears of inadequacy. In short, songwriting fosters both creativity and resilience. Let’s add value to our learning environment by giving students the opportunity to develop these highly important life skills!

Written By
Helen Perris
More from Helen Perris
The decision of whether or not to enter your students into an...
Read More
0 replies on “Songwriting with your Students”