Christopher Norton is very well-known for his ground-breaking Microjazz series, which first came out in 1983 and is still delighting both students and teachers throughout the world. More recently, his Connections for Piano and American Popular Piano series have continued to cement his reputation as a composer of catchy melodies as well as a jazz educator par excellence.

Christopher’s Preludes for piano are a series of books containing intermediate to advanced pieces in rock, Latin, country, jazz and Eastern styles. Many of these pieces have become popular choices for festivals and competitions, as well as for examination candidates! Some teachers may not realise that Christopher Norton has always been an excellent and distinctive arranger of existing melodies. In fact, his earliest publication, dating from 1981, was Carol Jazz (Universal Edition), which contained 7 very characteristic “takes” on existing Christmas tunes. 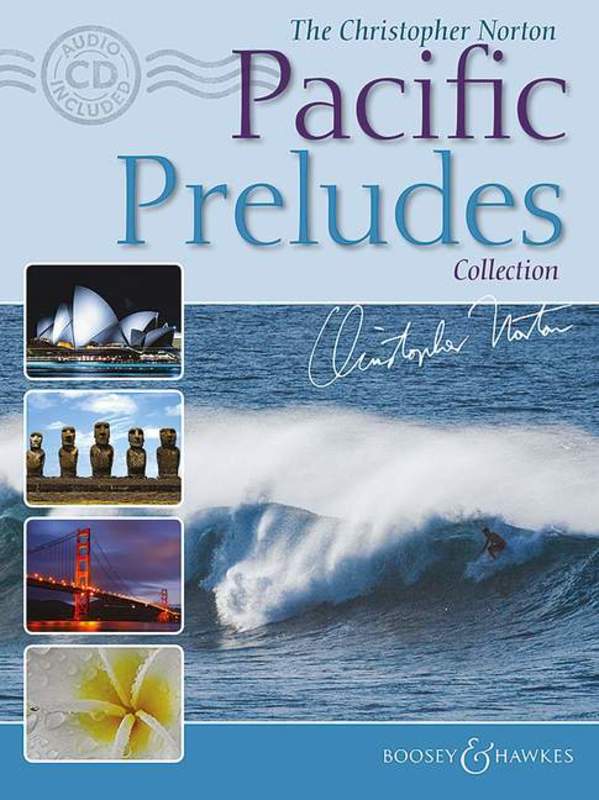 The new hot-off-the-shelf publication is Pacific Preludes, also for the late intermediate pianist, in which Christopher uses folk songs from a number of countries around the Pacific, including, inevitably, his native New Zealand! Other countries represented are Australia, Chile, China, Colombia, Guatemala, Honduras, Mexico, Peru, The Philippines, Russia, the USA and Vietnam. Some of the 14 melodies are very well known, almost informal national anthems, while others will be new to most listeners. The first piece in the collection is Anching, a Filipino song that was written by a grandfather of Jovanni-Rey de Pedro in the early 20th century. Here’s the beginning of the original melody (below).

Christopher Norton comments: “This melody immediately suggested an evocative accompaniment figure to me” (below)

“A new melody appears at first, then the original melody arrives, divided gracefully between the hands and embroidered ornately” (below). The Australian piece in the collection is Waltzing Matilda, turned into a sprightly ragtime number! The New Zealand pieces are Pokarekare Ana and Now Is The Hour, a song which was very popular during World War 2, and was recorded by Vera Lynn. The opening is an new idea, which should be beautifully shaped and played with rubato (below).

The original melody is again split between the hands and woven, chorale prelude-style, into what is effectively an original composition. There are a number of beautiful ballads in the collection, but also very extroverted South and Central American pieces (Cielito Lindo from Mexico, El Guapango Chorotega from Honduras and La Trastrasera from Chile), evocative rock-style pieces (Mi Palomita from Peru), a brooding Russian piece, (Oy de ne vecher) and a traditional folk-style (Sweet Betsy from Pike from the west coast of the USA.) Here is an excerpt from one of the more extrovert pieces, El Guapango Chorotega. This is tricky, but very exciting to play (below)!

Students will find these extremely useful as performance pieces, either as individual items or clustered into groups (or even played as a 14-piece recital lasting just under 40 minutes) As with Eastern Preludes, an accompanying CD puts each Prelude on the map with stylish demonstration performances by Iain Farrington.The demonstration recordings are available on Soundcloud – www.soundcloud.com/christophernorton.

Written By
Nathan Rippon
More from Nathan Rippon
The conference was launched in 1993 in Adelaide, and brings together pianists,...
Read More
0 replies on “Pacific Preludes Collection from Christopher Norton”