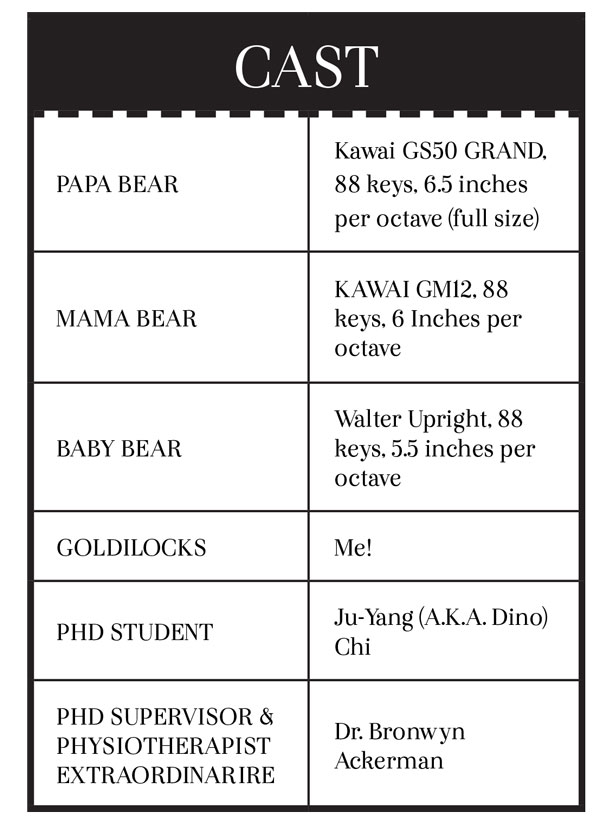 Once upon a time, there were three different sized pianos: Papa Bear, Mama Bear and Baby Bear.

Ok, enough with the bedtime story style… but the cast of this article remains as above!

Earlier in 2017, I was lucky enough to participate in a really special study. It all started when I went to visit my friend and colleague Erica Booker to talk about Suzuki training. After we finished discussing all things Suzuki she told me about a study taking place in her home, which contains (amongst many pianos and at least one harpsichord) two pianos that are specially made with reduced octave spans: 6 inches (Mama Bear) and 5.5 inches (Baby Bear) per octave, instead of the usual 6.5 inches (Papa Bear) per octave. They needed six advanced/professional pianists to take part — I said yes please, sign me up!
A physiotherapy PhD student named Ju-yang Chi (we’ll call him Dino; that’s his Aussie name) is assessing whether pianists are under less strain when playing on smaller-sized keyboards, and Erica is helping to make this research super relevant and easily accessible.
This meant I had the opportunity to

The study took place over two consecutive Sunday afternoons, in Erica’s home. The first Sunday I had my hand span, arm length, and hand strength measured, and I got to have a practice on each of the smaller keyboards. I had to prepare a 2-minute excerpt of a piece of my choice, which had to include some fatiguing parts. I chose ‘Chopinata’ by Doucet. I also had to learn three short studies by Dohnanyi: no. 24 on chord inversions, no. 37 on alternating parts of chords and no. 38 on double octaves. The idea of these three studies is that they are quite stretchy and taxing on the hand. Also, double octaves have always been my nemesis, so I really had to practise that one a lot! 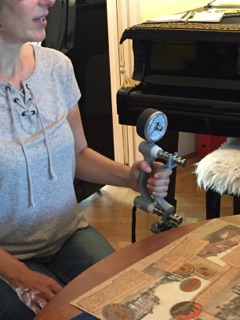 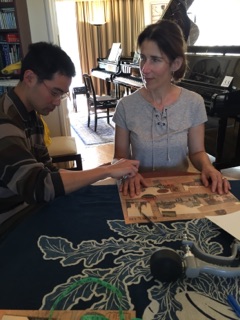 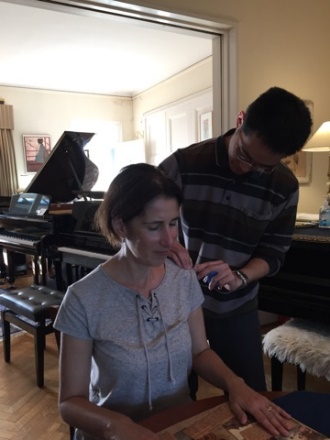 The chords were SOOOOO much easier to play on the smaller keyboards. Now I know how Rachmaninoff felt when he played on a normal keyboard! The double octaves were also much less fatiguing, although it was freaky to have a different hand span to play them. On the smallest keyboard – 5.5 inches per octave – it felt like playing consecutive 7ths. Easy!
So that was the preparatory stage. The next Sunday was the actual wiring up and recording of the playing. Dino was there as well as Dr Bronwyn Ackerman, who is the premier physiotherapist in Australia (and perhaps the world???) in terms of musicians’ posture and muscle health while playing. Bronwyn scrubbed my skin and then she and Dino started attaching electrodes. Here I am halfway through, and then all wired up: 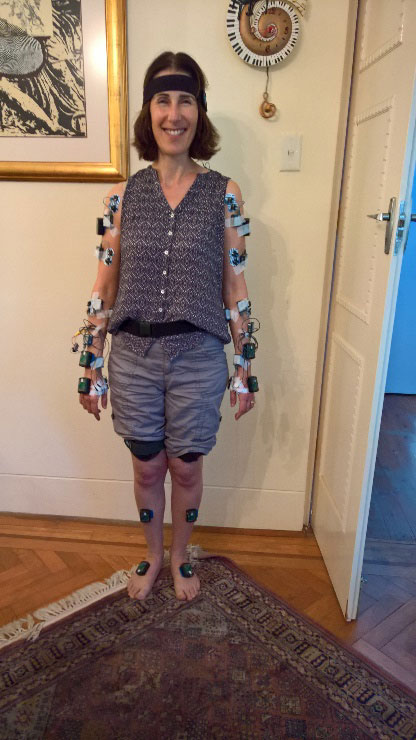 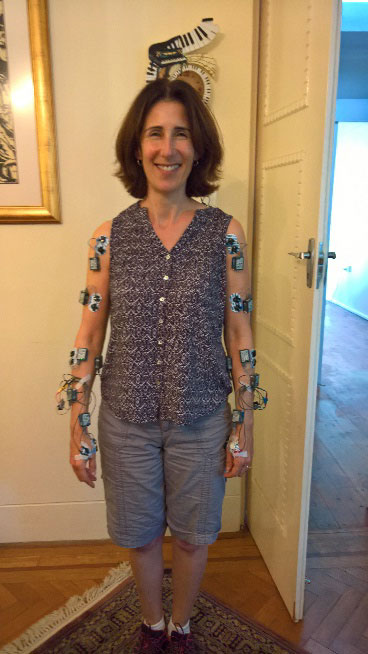 Dino then took me through some tests of my muscle strength, as they needed to get an idea of each individual pianist’s muscles when they were at capacity.
My arms felt super strange weighed down with all those things! However, it was important to have it all attached, because it meant that when I played they could observe my muscle and skeletal action.

It was SO WEIRD to see myself like this! The colours on the left of the image in the above show my muscles working to varying degrees. The top left (bright green) is my upper left trapezoid and this muscle apparently wouldn’t ‘turn off’ during the whole study, even when I was playing on the smallest keyboard and experiencing the least strain. I have to do something about this; my posture is not right and this muscle is working far too hard, causing strain and tension in my shoulder and inhibiting my technique.
I was told which studies to play on which keyboard (constantly swapping between normal, 6 inch and 5.5 inch) and had to keep going until I had played all four things (the three Dohnanyi studies and my Chopinata excerpt) on all three pianos.

Once I had finished doing all the playing, it was time to take off the electrodes and get changed back into warm clothes (it was a freezing cold winter’s day but I was told I had to wear shorts and a sleeveless top!). Then came the really invaluable part of the afternoon for me: Bronwyn spent some time going over my posture at the piano. It turns out that although I have a good position and forward tilt on the stool, I am arching my back when I play and this is causing tension in my neck and shoulder. Bronwyn also showed me that my left shoulder is too far forward and I will have to do exercises to relieve those muscles.

Finally, we talked about sitting on the stool: how to get rid of the arch. It’s important to feel the ‘sitting bones’ in the hips and pubic bone and to take the weight in those. Then lean forward so that more weight can be felt in the thighs and feet. Once this sitting position is correct, the back should be straight but not at all arched. I almost had to have a feeling of a very slight slouch in my back, to get rid of the arch. But it definitely frees up the neck and shoulders.
So all in all I have lots of work to do to fix my muscles. I feel so lucky to have been able to participate in a study that helped me find out so much about my own posture!

Below is Dino’s summary of the study and why he is doing this research. It may result in more availability of smaller sized keyboards. Will this be a beneficial thing for the piano community? We’ll have to wait and see!

Written By
Samantha Coates
More from Samantha Coates
Well how’s that for a loaded question! Impossible to answer unless you’re...
Read More
0 replies on “Goldilocks and the Three Pianos – Ergonomics in pianists”