“I was around eight years old when I took my first AMEB exam. Strange as it may seem, I had a dream the night before in which I pictured almost exactly the circumstances of the exam itself. Several decades later, enriched by years of studying, performing, teaching and examining, I found myself charged with the responsibility of compiling a collection of repertoire that would lead a new generation of students into the joys of musical engagement.”

Where does one begin with such an undertaking? I wanted to trawl as widely as I could to secure the best possible material, and headed immediately to some of Australia’s leading music warehouses and publishers. I was astounded by what I encountered. Not only did I find all the standard fare that has featured in pedagogical anthologies from time immemorial, but I also discovered an abundance of new material from around the world. The publishers showed great generosity in making their vast holdings available for perusal, even agreeing to send much of it to my home for more detailed appraisal. For the next two months, my music room floor was covered with piles of music scores. With added material from my own personal library, university collections and internet downloads, literally thousands of pieces were included in the mix for consideration. Gradually, I was able to whittle these down to an initial short list of around 350 works, from which 128 were finally selected for the nine volume series.

I was looking for material that was attractive and engaging, interesting for both students and teachers. I sought pieces that lay naturally under the hand, which explored the distinctive character and sonority of the piano and had a clear musical and pedagogical purpose. I wanted to cater for different tastes and learning styles through repertoire that was both challenging and achievable. Most of all, I wanted the selections to elicit a true sense of ownership from the players, something that goes beyond mere technical satisfaction to embrace a deeper and more personal connection with the music itself. The pieces needed to have a distinctive and accessible musical character, each with a type of expressive doorway leading to the treasures within.

I was keen for the repertoire to represent composers of different times, styles, nationality and gender. I wanted students to experience the work of the great composers while also sampling interesting and engaging pieces by less familiar names. So alongside Haydn and Mozart, we have Georg Benda and Leopold Koželuch. In addition to Chopin and Mendelssohn, there is George Chadwick, Niels Gade and Cécile Chaminade. There are two Schumanns (Robert and Clara) and two Handels (George and Amanda, each from a different century and a different continent). The Bach family is well represented, with pieces by Johann Sebastian, Wilhelm Friedemann, Johann Christian and Carl Philipp Emanuel, showing just how different they all were. The Grade 1 canons have a somewhat quirky twist while the List A selections include several pieces that explore technical or contrapuntal elements in a fresh, modern context.

While I wished to ensure that Australian composers were adequately represented, I was not expecting to encounter such a wealth of excellent material. The Series includes 25 works by 17 Australian composers, some of them well known nationally and internationally, others working quietly but effectively in their own pedagogical settings.

The quality and range of the repertoire was naturally of critical importance, but so too was the presentation. Over the years, the AMEB has developed extremely high publishing standards, producing musical texts that are based on the best possible sources. An important part of my role was to edit the scores in such a way that they faithfully represented the composers’ texts while also giving practical guidance to candidates and teachers.

This aspect of the task was much more complex than one might initially have imagined, if only because of the different ways in which composers have, over time, regarded the printed score. From the 19th century onwards, they provided more and more instructions for performers, including tempo markings, dynamics, articulation signs and pedalling. More recently, some composers have become quite prescriptive, loading their scores with information and expecting the performer to assume the role of obedient servant rather than creative collaborator.

Compare this with an 18th century composer who wrote music solely for personal use, either as player, teacher or musical director. They would have been shocked to think that someone, 300 years later and in a country of which they were completely unaware, might wish to play or teach their compositions. They had no reason to write any more than the notes themselves, and even then they sometimes only notated a skeleton — enough to remind them how the piece went but without the level of precision that we now take for granted in a musical score. In the unlikely event that someone in a neighbouring district might acquire a copy, they too would know how to approach the piece because there was a language of music that every educated musician understood and instinctively applied. Today, centuries later, musicians are educated in a completely different way and what was obvious to an 18th century mind may be entirely foreign to us.

This dilemma comes very much to the fore in music from the Baroque and early Classical periods, where composers typically presented just the notes, with few if any interpretative clues. The most authentic modern editions present as closely as possible precisely what the composer wrote, with no additions or alterations. Such editions can take us close to the musical mind of a Bach or a Haydn, yet, unless one is well informed about contemporary performance conventions, it is very easy to miss the musical intent and — even with the best will in the world — completely misinterpret what was intended. Fortunately, there were distinguished contemporary musicians such as Carl Philipp Emanuel Bach and Daniel Türk, who wrote in great detail about such performance conventions, giving copious examples of how the music of the time was actually played.

I wanted to trawl as widely as I could to secure the best possible material…Not only did I find all the standard fare that has featured in pedagogical anthologies from time immemorial, but I also discovered an abundance of new material from around the world.

Series 17 seeks to provide practical help by offering a few performance clues (mostly tempi, dynamics and some articulation markings), designed to flesh-out the original score without destroying its integrity. These additions have been kept to a minimum and have been distinguished from the remainder of the text by the use of a lighter, ‘stippled’ print.

I hope that users of Series 17 will not only be inspired by the music itself, but also encouraged to engage with it deeply and personally. My own early experience with an AMEB grade book led me along a surprising and rewarding path. I hope that this series too will have a value that extends well beyond the examination context to support longer term personal and artistic enrichment. 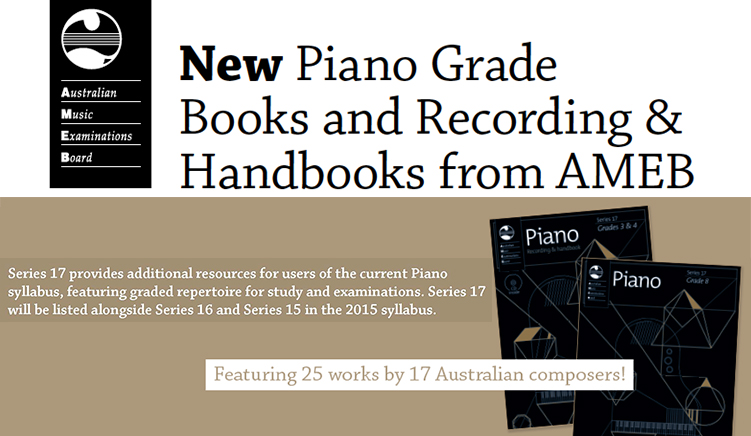 Written By
David Lockett
More from David Lockett
In the same year AMEB is celebrating their Centenary, they will also...
Read More
0 replies on “Doorway to the Treasures Within”