Improvisation can be a richly rewarding pursuit and help lead to exciting new avenues of musical discovery and expression. And one needn’t necessarily have ambitious performance goals to benefit from its study. For even a modest exploration of improvisation can sharpen aural skills and help strengthen understanding of theory, harmony, and composition. In fact one of my greatest professional joys has been to see such benefits realised with the many dozens of students and teachers I’ve worked with over the years.

Of course improvisation is quite a broad topic and to provide a comprehensive introduction here would not be practical. So for the sake of brevity I’ve chosen to focus on melodic content, specifically two versatile (and ubiquitous) scales — the pentatonic and blues scales. These scales have been the melodic building blocks for countless improvisations, in virtually every contemporary style (jazz, pop, rock, country, reggae, R&B, etc, etc). Now, of course, musicians are never restricted to use just a single series of notes for their solos and many songs contain harmonic shifts that require melodic adjustment. But for simpler pieces that employ more basic chord progressions, a single scale can do wonders. So let us now take a look at our first magical scale, the pentatonic.

The pentatonic scale (Ex. 1) is surely the most universal (and universally applicable!) scale in all of music. It dates back thousands of years and may be found the whole world over. It consists of just five pitches and can easily be constructed by simply omitting the 4th and 7th tones from any major scale. The pentatonic scale is a fantastic place to start when improvising. For not only does it contain a fewer number of pitches than the major or minor scale but, as stated above, it is also exceedingly popular.

Play the scale and get to know the notes, including moving up and down to neighbouring octaves. Explore changing direction at various points and repeating notes. Moving stepwise (rather than skipping or leaping scale tones) may give you the most pleasing (and musical) results. Already you might have happened upon a few familiar melodies. Not surprising, since the pentatonic scale can be found everywhere! 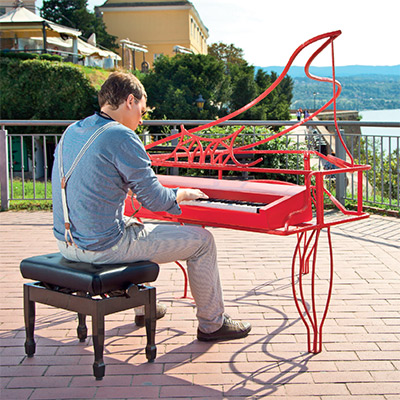 Okay, let’s have some fun. Ex. 2 features a 4-measure progression in C major. We’re now going to improvise some melodic phrases using only the notes from the C pentatonic scale. Strive to begin and end your ideas, at first, with the tonic note (C). This reinforces the tonal centre and can help produce clearer and more concise phrases. Notice there is one chord symbol per measure. Your left hand may provide any accompaniment you wish but I strongly suggest starting by striking the chord on beat one and then holding it for the full measure. (Melodic improv is challenging enough! We don’t need to muddy the waters at this stage with an overactive left hand.)

Start with a slow to moderate tempo. Feel free to use a metronome for rhythmic stability. Or better yet, try using a sequenced percussion pattern like those available on many keyboards, computers, smart phones, etc. This can be great fun since there are usually dozens of different styles and grooves to choose from. Keep your right hand ideas short and concise. Don’t be afraid to use space (rests) between phrases! Do you find that some notes clash with certain chords? We should be sensitive to this and strive to minimise unwanted dissonance. For instance if a C is overly emphasised while playing a G chord it can sound harsh, but the same note will work fine when resolved up or down as a passing tone.

Rhythm is the Key

Challenging, isn’t it? Yes indeed. It takes time to build confidence and to play with authority. You may also feel that you’re quickly running out of ideas. Well the most effective way to expand one’s quiver of ideas is to listen to the professionals and you can start with those in your personal music collection. As you listen to a recording pick out a short vocal or instrumental passage that you enjoy. Break it down further by selecting a small phase — 2 to 4 beats is plenty. Rather than analysing the specific notes focus only on the rhythm. Once you free that rhythm from the melody you have a strong pattern for your own exploration. Now try improvising some melodic ideas using this new rhythm. Good improvisation is built upon strong rhythmic phrasing. So it’s important to keep your ears open and strive to continuously absorb and explore new rhythms.

And it’s never too soon to play along to some of your favourite recordings! You may already have dozens (hundreds!) of songs in your collection that use only diatonic progressions (chords built exclusively from the tonic key). It’s great fun to improvise to those recordings once you (a) recognize the key and (b) learn its pentatonic scale. No need to worry about left hand, the recording will supply the harmonic foundation — just have fun! Create different melodic ideas and don’t be afraid to absorb, imitate, and expand upon the various rhythms you hear from the vocals or instrumental solos.

Good news — we don’t have to learn a new scale when improvising in a minor key! We can simply use the same relative major / relative minor relationship that we already employ in traditional studies. So, if I want to improvise in the key of A minor (the relative minor of C major) I can use the same pentatonic scale that I used when in C major!

Compare Ex. 3 to Ex. 1. Notice that they utilise the same five pitches. The difference is that our tonic (tonal centre) has shifted from C to A. Ex. 4 (below) features a short progression in the key of A minor. Improvise to this new progression using the A minor pentatonic scale. Follow the guidelines as provided above remembering that our tonic note has now shifted to A.

By shifting the tonic we were able to produce a new scale (with new applications) without altering any pitches. So take comfort that our next scale will retain these notes but with one nifty addition…

Take a good look at Ex. 5 and compare it to Ex. 1. Notice the scales are identical except that the scale in Ex. 5 contains an additional pitch. This addition magically transforms the pentatonic scale into the major blues scale. Ta da! And this new pitch is a cool one. In fact you can think of it as the ultimate blues note — the lowered third. Play around with this scale and get to know it. The added ‘bite’ of the new blues note will be a fun addition to your melodic ideas. When ready return to Ex. 2 and improvise to that progression using the new scale.

Okay, so if we can produce a new pentatonic scale by shifting to its relative minor, can we do the same thing for the blues scale? Yes indeed. The only hitch is semantic. When referring to the new reconfigured scale it’s customary to just call it simply the ‘blues scale’ (as opposed to ‘minor blues scale’). We’ll soon see that its applications go beyond just minor keys. But first things first. Ex. 6 (below) presents the A blues scale.

Compare Ex. 5 to Ex. 6. Notice, as with the two relative pentatonic scales, that the two relative blues scales contain identical pitches! We just shift the tonal centre to a new tonic. You might guess what’s next. That’s right, return to Ex. 4 and try that progression with the new scale.

I Got the Blues

Let’s finish by exploring some additional applications for the blues scales. Now it’s a somewhat tricky business attempting to put these scales and techniques into neat little boxes, but it would not be a stretch to view the material above as fitting best into the worlds of pop, rock, and country whereas the material below (while certainly applicable to those aforementioned styles) are most closely associated with jazz and blues. Okay, so what’s different? That would be our harmonies. We’ll move beyond the triad to use the dominant 7th chord, built from the I, IV, and V (Ex 7). We’ll then sequence those chords into a common 12-bar blues progression (Ex. 8). Feel free to use any left hand voicings you wish but if you’re looking for a solid starting point please use the ones suggested in Ex. 7.

I invite you now to return to the C major blues scale (Ex. 5) while playing through the classic blues progression found in Ex. 8. You may want to shift to bluesy swing rhythms at this point (if you haven’t already!) playing the quavers in lazy ‘long-short’ pairs. And, of course, feel free to move your right hand ideas higher so as not to bump into the left hand.

Again, you may notice some notes clashing with certain chords. Although this is not always an undesirable effect you should be careful with certain combinations (such as E-natural with the F7 chord — ouch!). Listen, adjust, adapt.

Finally let’s shift to the relative once again. First revisit the A blues scale from Ex. 6. Now here’s where things get interesting! In previous examples we’ve switched tonality from major to minor for the accompaniment. But this time, even though we’re shifting our tonal centre from C to A, we’re going to retain the same progression and just transpose it. Ex. 9 contains suggested left hand voicings and Ex. 10 presents the 12-bar progression in the new key.

Well, I hope you’ve enjoyed this brief foray into these popular scales and that it will inspire you to explore and experiment further with improvisation. And as you do you’ll become more and more attuned to their sounds and soon be spotting these scale passages everywhere! I sure do. And yet I continue to be surprised and impressed by clever new variations. It seems that musicians are nowhere near exhausting the possibilities.